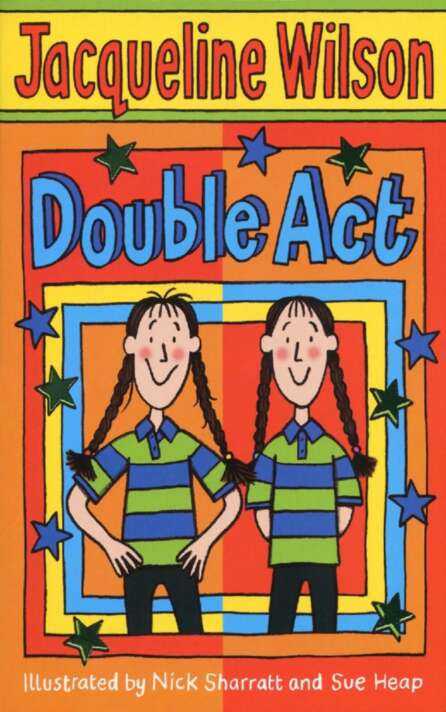 WINNER OF THE SMARTIES PRIZE AND

HIGHLY COMMENDED FOR THE

I'm an only child. I always longed for a sister. I thought it would be particularly marvellous to have a twin sister.

Then you need never feel lonely. You'd always have someone to play with, someone to share secrets, someone to walk to school with and whisper to at night.

I've always been fascinated by identical twins. It must be so weird looking at another person exactly like yourself. Some twins invent their own language when they're very little and get wrapped up in their own private twin-world. I wanted to write about this.

I decided my twins would be particularly close because their mum had died. I like jewel names so I called their mother Opal. I thought she'd call her twin daughters jewel names too. Rubies are red and Garnets are red, often quite hard to tell apart. They seemed perfect names. Rubies are much more expensive than garnets. I thought my Ruby would particularly like that!

Ruby was born twenty minutes before Garnet. She says that makes her the boss. She certainly bosses Garnet around! The twins look absolutely identical but they've got very different personalities. Ruby is very bouncy and funny and a terrible show off. She's desperate to be an actress when she grows up. Garnet

I don't think you'd be able to tell the twins apart at the beginning of the day – but you'd have more luck at the end. Both girls have fringes and long plaits.

Garnet's hair stays neat all day long, with carefully tied ribbons. Her shirt stays tucked in her skirt, her socks stay white, her shoes never get scuffed. Ruby can't ever manage to stay neat and tidy. Her fringe sticks up and her plaits unravel and she loses her hair ribbons. Her shirt crumples, her skirt tears, her socks fall down and her shoes get covered in mud.

They take turns writing an account of their lives in a big red book. I don't always say who's doing the talking but I think it's pretty obvious. They're meant to have done all the marvellous funny illustrations in the book too. Nick Sharratt has done all the Ruby drawings, Sue Heap has done all the Garnet drawings. It's fun flicking though the book, seeing if you can tell the difference!